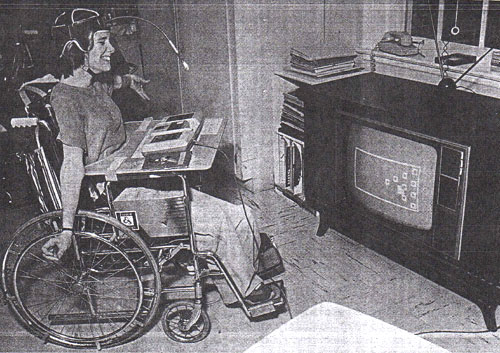 These games are a fine place to start getting to grips with the basics of Emulator Gaming and in playing using switches or joystick compatible controllers. Included is probably the first ever commercial one-switch game: "Space War: Vertical Intercept" from 1977.

To play the games listed below you will need to use the RCA Studio II Emulator. Bowling is one of the five in-built games and can be played by pressing "3" as soon as you have the emulator running.

Space War and Squash/Tennis were originally cartridge games that you could purchase separately 30+ years ago. These are now emulated as game "ROM" files some of which are included with the RCA Studio II Emulator as .ST2 files. You can open these much as you would a word processor document.

Prepare to travel way back in accessible gaming time...

Aiming continuously adjusts from top to bottom so players have only to choose the right moment to throw the ball and how to throw it.

Space War shoot-em-up for one or two players.

Includes two game variations: The one player Horizontal Intercept where you steer a rocket into clouds and the two player Vertical Intercept perhaps the first ever one-switch game for home play.

Tennis / Squash sports for one or two players.