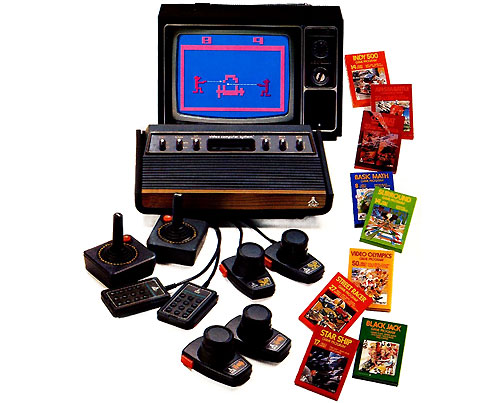 The Atari VCS (aka Atari 2600) saw a huge number of games released from its debut in 1977. These include a range of two-player competitive games such as Combat as well as many fun coin-op conversions such as Space Invaders.

To play the games listed below on a modern PC you will need to use an Atari VCS Emulator and game files (aka ROM images) for each game. You will likely need to keep a separate record of what keys are needed as well as taking notes from each game's instruction manual.

The Stella emulator is a great place to experiment with 4Noah utilities for reducing controls if needed as well as JoyToKey if you are using a joystick compatible controller. See the Accessible Gaming Utilities for direct links.

You can discover many more games at AtariAge and Le Geek, the latter of which hosts the excellent shoot-em-up Robot Tank. See the 4Noah VCS page for a list of good games that can be adapted for one-switch play.

Air-Sea Battle is a shooting gallery game for one or two players. It can be played with FIRE alone once started.

All games have a 2 minutes and 16 seconds time limit. Simply shoot as many targets as you can to beat your own score or your opponents score.

Asteroids can be played with just one button but will take some setting up. E.g.:

Use "4Noah VCS" set to LEFT and RIGHT mode with auto-fire on. You are stuck in the middle with control only over aiming your fire. Alternatively, set the ship constantly spinning then hook up the main play switch to activate HYPERSPACE (down). This turns Asteroids into a game of chicken on games variations 1 to 9.

10-pin Bowling for one or two players.

This fun game can be played using a single switch if an enabler will assist with aiming shots. For instance, the helper could constantly move up and down, until the moment that the main player hits the fire button. Alternatively "4Noah VCS" allows for fuller one-switch control.

Difficulty "B" = easier to roll strikes and spares.

Canyon Bomber for one or two players.

Atari's first one-switch game for a home console. Canyon Bomber is a coin-op conversion where one or two players must drop bombs to clear a canyon of rocks.

Difficulty "B" allows a player to pull back their shot to quickly try again. Game variations 5 and 6 give players unlimited bombs - the first to score 1000 wins. Other variations set you a six miss limit.

I recommend setting the difficulty to "A" for a much more enjoyable game. Here your shots will stop if you are shot. Fastest draw wins!

Featuring a massive 112 game variations, there are many ways to play. One of the easier ways to play are of the "One player moves Other player fires" variety starting from 97.

Using "4Noah VCS" it is possible to play with one-switch alone using the auto-fire mode.

Hold down SELECT AND RESET (F1 and F2) to speed through the game variations.

Ms. Pac-Man for one player only.

Not really a very practical game for playing with one-button unless slowed down and using a 4Noah utility. However, it features the ability to choose how many ghosts you go up against, between one and four, making play much easier for those that can.

At the peak of Atari's success, a "Special Feature" was included as a selectable game variation within many of their top games: 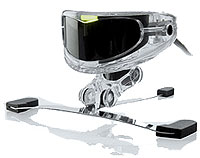 Games for use with paddles. With the Stella emulator these games can be played with any controller able to emulate the mouse or keyboard such as a head-tracker.

LEGAL NOTICE: Many game ROMs remain the copyright of the original owners who may or may not be happy for them to be played under emulation. Put in the context of these games impossible to play in their original format for some disabled gamers and I would hope that attitudes would be more relaxed. Support developers by letting them know why you can't play their games and offer some solutions.